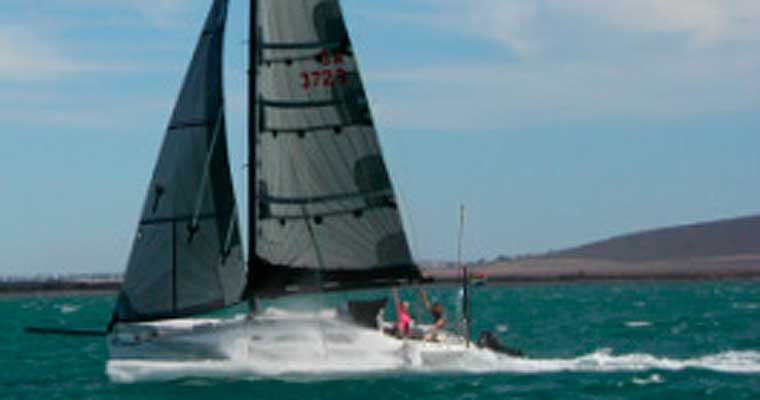 Banjo is a 31 foot Farrier F9AX trimaran designed by Ian Farrier of New Zealand. She was built by Frans Loots in St Francis Bay, and launched in November 2008.She has sailed in three Governors Cup Regattas from Simons Town to the Island of St Helena, winning line honours in all three – sailed by Frans Loots and Jeremy Bagshaw in 2010, and Kevin Webb, Sarel Van der Merwe and Brad Stemmett in 2012 and 2014.

She is no stranger to the Mossel Bay Race, in which she won line honours and overall first on handicap in June 2013. Banjo sails out of Port Owen on the west coast, and is used as the designer quoted “All Farrier designs are safe family orientated cruisers – they just happen to be fast”.
Current owner Kevin Webb and co-skipper Sarel van der Merwe with regular Crew Brad Stemmett are all fierce competitors in other sailing disciplines, including dinghy’s, racing catamarans, H23’s and even radio controlled model yachts – but on Banjo we are a team with a mission – to have as much fun as possible, as fast and safe as possible! Watch the video below!